I don’t mean to criticize (OK, I really do), but the headline “More human than human: People prefer robots that look like them”, should not be taken at face value (pun intended). Scientific studies can be extremely valuable, but not when they’re taken out of context. Many times,  headlines are created which give the reader a false summary of the research.  I doubt the writer of the article created the title, as it is the creative title that translates into advertising dollars for the publisher.  Who writes these titles?  60 Minutes?  The National Enquirer?  Am I going to have to come up with an annual misleading robot ‘headline’ award in addition to the most inaccurate robot story? 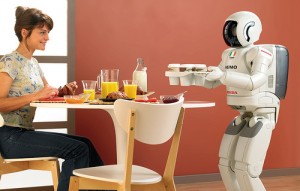 The study is interesting, and the article is written well, but the editor’s mistake — one that he/she is misleading the world with–is to let the 64 interviewees accounts for the “People.”

One tiny modifier would render this headline acceptable.