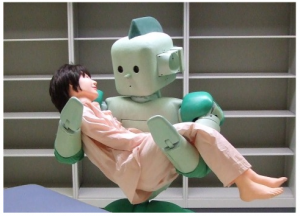 The Japanese Times wrote that the Japanese government has invested more money (about $20 million) for the 2013 budget alone (I don’t know the figures of how much in total the gov’t has invested in over the years), to develop ‘nursing care robot equipment’ for their aging population.  They’re preparing for the near-term when the number of Japanese over 65 is expected to increase by 30 percent in the next twelve years, requiring an expected 2.32 million to 2.44 million caregivers to look after them.

And how much has the U.S. invested in nursing care robot technology?  This is not a simple question nor does it have a simple answer.  The US gov’t primarily invests in military robotics, but some of that falls under ‘healthcare’ or ‘surgical’ or ‘medical’.  For example, the Vecna Bear Robot is being developed to autonomously go onto the battlefield to lift and carry an injured soldier.  This is HUGE (and a very difficult feat that will take years to perfect), but these technologies could (and will) be modified for robots to lift and carry a sick or disabled person from the bed to the bath. That is, of course, unless it’s cheaper for us to buy the Sony model that may already be in production.

One thing is for sure – the US is not making robotics in healthcare a national mandate, as are many countries in Asia.  I believe that this is the U.S.’ best shot at reducing the costs of medical care and caregiving.