Samantha – Turing me on 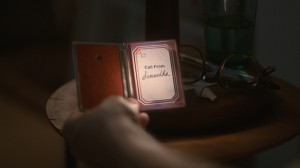 I love the following article about TIME’s Washington Bureau Chief trying to decipher if a telemarketer was a robot: http://newsfeed.time.com/2013/12/10/meet-the-robot-telemarketer-who-denies-shes-a-robot/

This is a story the World’s First Robotic Psychiatrist® has waited a lifetime for, as the significance is not so much as whether or not the caller was a human or a ‘robot’, but that it still has not been proven one way or another.

Alan Turing would be delighted.  (December was a good month for him. Just days ago, he was given a posthumous pardon by the Queen of England. The Royal pardon only took 61 years…)  Did Samantha pass the Turing Test?  She denied she was a robot, but that could be because she doesn’t perceive herself as one.  (If she were asked if she was a chatbot, she may have said yes. Robots typically do not refer to software only, even software with intelligence.)

According to the write-up, when asked, “What vegetable is found in tomato soup?” she said she did not understand the question.  Perhaps Samantha was just trying to cover up that she worked for the Reagan administration and was responsible for classifying ketchup as a suitable vegetable for school lunches. (But then again one would think that only a robot could possibly classify ketchup as vegetable.) To other questions she didn’t want to or could not answer, Samantha would complain of a bad connection.

Regardless of whether or not Samantha was a ‘robot’ or a ‘human’, she tried to stay on task to sell health insurance. With this as her primary goal, she would try again to ask questions pertinent to a sale.

What I see as the important issue in all this, is human perception.  It is almost 2014 and the Bureau Chief of TIME, obviously a super smart person, isn’t able to distinguish if he was talking to a human or a machine during a several minute conversation.  Furthermore, TIME did a bang-up write-up of this ‘bizarre’ (as they labeled it) piece that attracted more than half a million listeners to hear the taped conversation.

Here are my comments:

1) I am currently treating Samantha who is now unemployed.  Due to the patient-doctor confidentiality law, I cannot reveal her identity.  I am hoping, however, that she will get her confidence back to enter the next Loebner Prize contest.  (By the way, for a good time, I recommend contacting Mitsuku, last year’s winner.)

2) The agency that she worked for, premierhealthagency.com, is a Fort Lauderdale, Florida company.  Right there is a big flag.  I lived in that area for 15 years.  (I tried to get the state to change its license plates from ‘The Sunshine State’ to ‘The Scam State’).