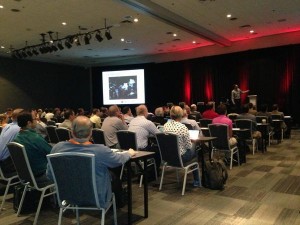 I recently had the privilege of attending an industry only event – the Robotics Industries Association (RIA) Collaborative Workshop. It’s been awhile since I’ve been in the audience at an RIA workshop;  a decade perhaps? As a non-engineer trying to understand robotics – one of the most complex technical fields on the planet (and off the planet) – and listen to the sessions by the world’s leading manufacturers at this Workshop – I need all the brain boosting I can to focus and understand.

However, today one is expected to Tweet to the conference #hashtag. Obviously, I want to support this industry event since I’m attending free of charge as Press. But normally I would be talking FACE-TO-FACE (who does that anymore?) with these industry pundits next to, beside, or in back of me. But not this time. Everyone else is using their fingers and thumbs on their own device. So much for having a casual conversation with these luminaries in between speakers (one of the main reasons I go is for networking); after all, I wouldn’t want them to take their eyes off of their device (are they listening to the speaker or using this time to communicate or work on a different task?). Not a problem, I decided; I’ll just learn from the speakers and share via Tweet what they are saying. I’m not that fast at the whole process – not that slow either – but I do have a limited brain capacity that is trying to processing the following steps: 1) take a pix, insert it into the Tweet; 2) think of content to add that no one else in the world could know; 3) make sure you have the proper #hashtags and @twitteraccounts; and then 4) finally post. How many slides have I missed? Quick, now I need to look and see if my Tweet has been noticed. Has it been Retweeted or Favorited? Have I received any new followers? Oh yeah, living in the moment and missing 90% of the talk because I’m tweeting…

I missed the other 10% of the talks, due to a new challenge that I didn’t have the last time I attended an RIA workshop. I had to keep taking my jacket off and on due to post-menopausal temperature changes. One minute (literally) I’m hot and the next I’m cold. I’m sitting in one of the front rows (so I can see and hear better) and I’m sure it was quite noticeable. It’s no wonder no one was talking to me – they probably thought I had Ebola. (Where is that smart clothing line “Hot Flash” to sense and treat this?)

Some things have not changed from the previous decades: a) though the number of female attendees is still small,  thankfully, there’s no line for the ladies’ bathroom during the breaks; b) Despite having many of the world’s most brilliant engineers in the room, the challenges of the audio/video in a convention hall still hose up presentations and c) I’m still a klutz as I spilled wine on Dr. Rodney Brooks during the post-networking hour.

Where’s that mobile robot that carries my drinks and food while I shake people’s hands and if I fall or trip, catches me?  Here now, but things to look forward to at my next RIA workshop.